When tragedies and miracles collide: A young couple’s NICU Journey

May 7, 2022. That was the due date Tolulope Omokore (former University of Central Florida Knights women’s basketball player) and Patrick Allen (former Georgia Bulldogs offensive lineman) were given in August 2021 when they found out they were pregnant. Adding to their excitement, they were having twins.

Fast forward to early January 2022, when Tolulope was at 22.5 weeks gestation. Everything with the pregnancy was going well until Tolulope began spotting. She immediately contacted her obstetrician (OB) and went in for a checkup and ultrasound. Both babies had good heart rates, and everything appeared normal.

The next day, the spotting occurred again. Back at her OB’s office, another ultrasound was performed. This time, Baby A (Amandi) had a strong heartbeat, but they couldn’t detect a heartbeat for Baby B (Asaiah). Tolulope and Patrick received the devastating news that Asaiah had passed away in the womb.

Tolulope was transported to Ascension Seton Medical Center in Austin via ambulance. She was given a thorough checkup, and everything looked good with Amandi, so she was discharged and instructed to rest at home.

“After what had just happened with Asaiah, we weren’t taking any chances with Amandi, so Patrick and I headed back to the hospital,” said Tolulope.

Tolulope received medications, such as magnesium sulfate to help delay labor and protect the baby’s brain and steroids to help mature Amandi’s lungs. The objective was to stave off labor for as long as possible, and Tolulope would remain in the hospital for the duration of her pregnancy.

Tolulope was settling in at the hospital for her long-term stay. However, Amandi had a different plan. At 23 weeks and two days gestation, “a gush of water came flooding out,” Tolulope explained. Shortly after, contractions started, and she was quickly moved to labor and delivery.

“Everything was happening so fast, and I was so scared,” said Tolulope. “They rushed me to the OR and the lights were so bright. There were lots of people there. They put my legs up and someone told me to push. I pushed twice, and baby Amandi came out.”

The medical team quickly moved Amandi to the incubator and began assessing him. Now, it was time to deliver Asaiah. Upon his birth, Tolulope and Patrick held him. They took pictures with their baby boy, giving them forever memories of the brief time they would have with him. Undoubtedly, they were devastated by the loss of Asaiah, but they knew Amandi was extremely premature, weighing only 1 pound, 5 ounces, and he needed them now more than ever. 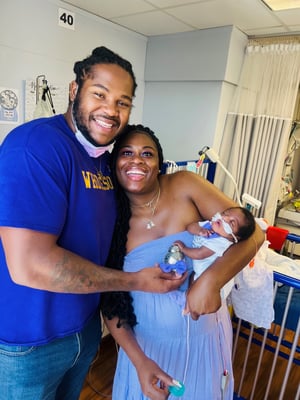 Shortly after delivery, Amandi was moved to the neonatal intensive care unit (NICU), his new home for the next 155 days.

“Dr. Patrick Hodges [a Pediatrix® Medical Group neonatologist who was present when Amandi was delivered and would be instrumental in his NICU care] visited with me about how impressed everyone was that Amandi was breathing on his own,” said Tolulope. “But his lungs got tired, so they had to assist him with a ventilator.”

Given the emotional and physical stress of the last several days, Tolulope needed to rest, so she didn’t go to the NICU the first night. However, Patrick went to check on Amandi and was able to FaceTime with her.

“He was so tiny and had all these wires hooked up to him,” she said. “I didn’t go up until the next day because I was so tired from everything we had just gone through, and I was scared. I didn’t know anything about the NICU, and I didn’t know if he was going to make it or if I was going to lose another baby.”

It would be quite a while before Amandi was “out of the woods.” According to the University of Rochester Medical Center, a study conducted at 19 medical centers revealed that babies born around 23 weeks gestation have about a 55% chance of survival.

“Amandi was quite ill in the beginning,” said Sami Smith, a Pediatrix neonatal nurse practitioner. “Initially, he was on a ventilator, and he had pneumothorax, requiring a chest tube. He also had some feeding intolerance in need of continuous gavage feeds, he developed pneumonia about six weeks in, and he had a pulmonary hemorrhage.”

It was touch and go for a while. Once, when Tolulope was holding Amandi, an alarm went off. The nurses came in, quickly took him from her and began assessing him. It ended up being something minor, but, again, Tolulope feared that maybe she was losing him.

“Dr. Donald Kelley [another Pediatrix neonatologist and one of Amandi’s primary caregivers] came in to talk to me about it,” she said. “He was so calm. I was shaking and freaking out, and he just remained calm as he talked to me and assured me everything was OK.”

The NICU team was determined to give Amandi every possible chance at a positive outcome. They worked tirelessly to address issues as they arose, and as time went on, Amandi began to grow and thrive.

Tolulope 's eagerness to participate and learn everything she could as he progressed was instrumental to his care and ability to thrive.

“Patrick and I didn’t need to take classes because we had hands-on training in the NICU,” she said. “Our primary nurses, Allie and Caroline, taught me so much that I could look at Amandi and recognize when something wasn’t right. There were times when an alarm would go off and I would know what to check for, like maybe his pulse oximeter came off, and I could just fix it myself. It was like I was a nurse, too.”

While in the NICU, Tolulope put together a scrapbook of their entire journey. She included the pictures of Asaiah, so Amandi would never forget his twin and their inspiring story. She brought notecards so the NICU team could write messages to include in the scrapbook.

“I can’t wait for Amandi to see the scrapbook and read all the amazing things everyone wrote about him so he can see how special he was and the impact he had on everyone in the NICU,” she said. “Everything everyone did for us was extraordinary. Our devastating situation was made peaceful by all the people who genuinely cared.” 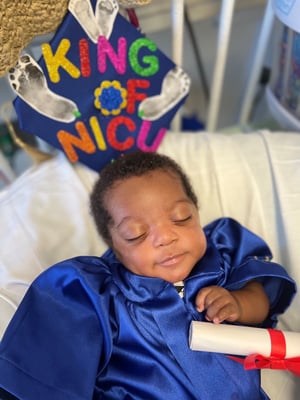 After more than five months in the NICU, on June 14, Amandi had reached all his milestones and was cleared to go home. The NICU staff gathered to celebrate as Patrick and Tolulope made their rounds with Amandi and said their goodbyes.

Amandi is now six months old and weighs more than 14 pounds. Looking at him, one would never imagine he came into the world so tiny and ill.

“Cases like Amandi’s gives me all the warmth in my heart to keep going, because we are faced with losses in that 22-to-23-week gestation mark, which have a huge impact on us,” said Sami. “So, when you see an extremely premature baby thrive the way Amandi has, it reminds us why we do what we do and how important our work is to so many babies and their families!”