Since birth, 6-year-old Brinlee McKee has suffered from chronic gastrointestinal issues. Mom Melissa had been on a quest for answers to no avail. While her symptoms were manageable through the years, they were disruptive, causing regular discomfort.

It all came to a head in early December 2021, when Brinlee experienced a sudden onset of severe abdominal pain and vomiting, eventually landing her at The Woman’s Hospital of Texas under the care of Sara Fallon, M.D., M.S., and the team at Pediatrix® Surgeons of Houston — a blessing in disguise that ultimately led to a long-sought-after diagnosis and solution, curing Brinlee of her condition. 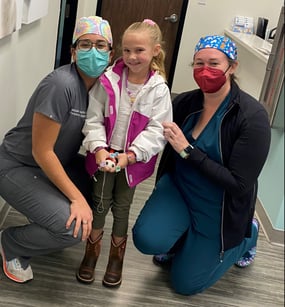 As an infant, Brinlee struggled with feedings. She also suffered from persistent constipation, despite following a high-fiber diet starting at age 1. As a result, her belly was constantly bloated. She began seeing a pediatric gastroenterologist at age 3 and underwent a litany of diagnostic testing, only to reveal encopresis, a condition that causes stool soiling due to long-term constipation. She was put on a strict daily regimen of laxatives, fiber supplements, probiotics and extra vitamins and started pelvic floor therapy, yet her symptoms remained the same during the past several years with no improvement.

While she was able to manage day-to-day, Brinlee was in a constant state of discomfort, which affected her ability to sleep and concentrate — to the point that her parents were concerned she may have attention-deficit/hyperactivity disorder (ADHD).

A solution in sight

The day Brinlee fell ill and was hospitalized, while frightening, was a turning point for the family.

“When she came to the hospital, she was very, very sick,” said Dr. Fallon. “The team worked to get her quickly prepared for the operating room, and shortly she went for an emergency surgery so we could address the blockage in her intestine.”

Dr. Fallon and the surgical team found that Brinlee had an internal hernia, which is a rare finding. The attachments to her intestine had a hole that had been present since birth, and the intestine had twisted itself through the hole. This caused both a blockage and an emergency problem with the blood supply to her intestine.

“Her intestine had been chronically flipped around on itself like a pretzel,” said Dr. Fallon. “It had been open enough for her to compensate for it her whole life. But eventually, the pretzel tightened in the wrong way and when it did that, the blood supply became compromised. It was unable to untangle itself, and the blockage worsened to the point that emergency surgery was required.”

In the first of two surgeries, Dr. Fallon unraveled the affected intestine and then placed a temporary dressing on Brinlee’s abdomen to protect the bowel. This gave time to determine which portion of the intestine needed to be removed and to resuscitate Brinlee. Two days later, the second surgery revealed that a piece of her intestine had been chronically narrowed, which Dr. Fallon removed. The intestine was reconnected, now with correct, straight anatomy.

“Having that specific anatomy and that issue is not common,” said Dr. Fallon. “I have seen circumstances where the child’s intestine has been compromised to the point that the majority of it needs to be removed for survival. This can result in a patient needing long-term IV nutrition and even intestinal transplantation. It can be a very hazardous situation. I am very thankful we were able to get her to the operating room in time to prevent this from happening.”

Brinlee recovered from surgery remarkably well, quickly meeting all her goals of walking and getting back to normal eating habits to make it home in time for Christmas.

“We really tried to bring the spirt of Christmas to Brinlee’s room,” said Natalie Vala, P.A. “We were pretty confident she was going to leave before Christmas, but she was still missing all the fun Christmas things that happen around that time of year, and so it was important to bring that to the hospital.”

After a 14-day stay, Brinlee was discharged about a week before the holidays.

Today, Brinlee is thriving, unbound by any dietary or physical restrictions.

“Honestly, I thought she had ADHD — she hit all the boxes for it, and we had just started that process of testing right before her episode hit,” said Melissa. “She couldn’t sit still, was very on the go and would never sleep. But now she sleeps, she’s calmer and she just feels better overall. It’s crazy to see the drastic difference. I think it was that she was just in pain but was so little and didn’t know how to express it, so she was constantly moving. She tells me all the time how nice it is to not have her tummy hurting and have a big tummy. And, of course, she’s loving not having to be on Miralax and fiber — she calls them her sugars. She tells me, ‘I’m so glad I don’t have to take my sugars anymore.’”

Dr. Fallon is thrilled with Brinlee’s progress and the unexpected improvement in her behavior. 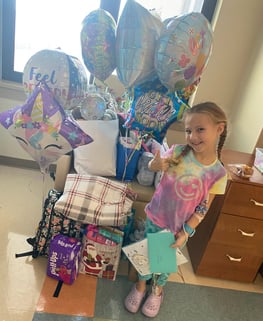 “The incredible part of this for me as a physician is hearing about this indirectly affecting things like attention span. This difference that Melissa has noticed is truly an incredible outcome that I’ve never heard of before,” she said. “I’m so happy for her and can’t wait to see her in the office again.”

Reflecting on Brinlee’s journey, Melissa said, “There aren’t enough words to express my gratitude for how proactive Dr. Fallon and her team were. I’m so thankful they knew what to do because we’ve been through so many doctors with Brinlee and I could never get any answers. It was just a relief that she knew exactly what to pinpoint. Truly, they’re heroes. I’ve read numerous stories about kids with similar conditions, or even milder versions of what Brinlee had, and they don’t make it when they’re older. I’m just truly thankful and forever grateful for Dr. Fallon and her team — they’re amazing.”