Often, the need for such care catches families off guard, and the fear and anxiety immediately set in. Add to these emotions the stress of transporting the newborn to a tertiary facility with a higher level of specialized care to manage the baby’s condition(s). Not only does that potentially separate the baby from the mother and family, but transferring a high-risk or critically ill newborn poses increased chances for adverse events to occur during transport.

A tertiary hospital, such as The Women’s Hospital of Texas (TWHT) in Houston, offers highly specialized expertise, equipment and programs designed to prevent the need for patient transfers.

As part of its strategy to provide comprehensive care to its patients, the hospital implemented an extracorporeal membrane oxygenation (ECMO) program last year. ECMO is used as a rescue therapy. Without it, many babies must be sent to alternative hospitals. Even if a critically ill newborn doesn’t require ECMO therapy, the option must be available to keep a baby in-house.

In addition, through its long-standing partnership with TWHT, Pediatrix® Medical Group provides specialized care to the hospital’s maternal-fetal medicine and neonatology patients. Last year, the partnership was expanded to include a team of pediatric surgeons covering a broad range of surgical needs for TWHT patients.

The addition of pediatric surgeons allows TWHT to manage complex cases in a seamless, integrated manner without having to transfer babies to other locations for these services. Most importantly for patients and families, this integrated team is able to care for both the recovering mother and her new baby in one location.

What is ECMO? When a baby is critically ill due to lung or heart problems, an ECMO machine pumps blood to an oxygenator, also called an artificial lung, supplying the baby with ample oxygen while removing carbon dioxide from the blood. It allows the lungs and heart to rest until they can function on their own properly.

“Our goal is to provide comprehensive quality care within our NICU,” said Owais Khan, M.D., chairman of neonatology and a neonatologist at TWHT. “It was important to develop our ECMO program so we could provide seamless care from birth to discharge without having to transfer babies.”

Starting from the ground up, developing the program required a team of specialists to determine the best equipment, human resources and processes.

“We started from zero, so we pulled from as many resources as we could to create a state-of-the-art ECMO program,” said Ashley Gonzalez, D.O., ECMO medical director for Pediatrix Neonatology of Houston and a neonatologist at TWHT. “We had to decide what we needed to purchase in terms of equipment. We worked with the pharmacy and lab to ensure they had the medication and lab testing we would need while a patient is on ECMO. Of course, human resources were a great part of the program development as well. We wanted to train our own ECMO specialists because they are at the bedside and sit with the pump and know exactly what is needed every step of the way.” 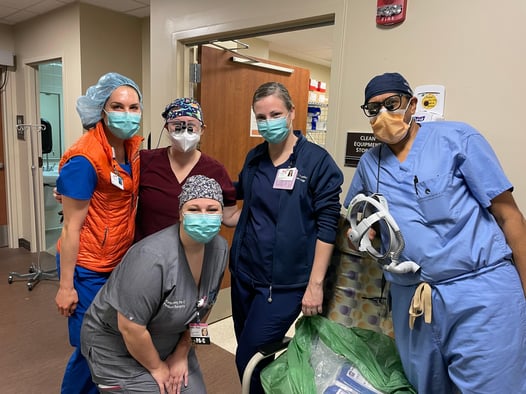 Shortly after introducing the pediatric surgeons and ECMO program, a full-term baby was delivered at The Women’s Hospital of Texas. What was expected to be a routine delivery and healthy full-term baby was anything but routine and healthy. Upon initial evaluation, it was quickly determined that the newborn could not oxygenate, meaning the lungs were not producing oxygen to the blood before returning it to the heart.

“The baby was not able to oxygenate at all and declined very rapidly,” said Sara Fallon, M.D., ECMO surgical director for Pediatrix Surgeons of Houston and a pediatric surgeon at TWHT. “It was a surprise because this was a term baby who otherwise had good prenatal care, and there was no forewarning at all before delivery indicating this baby would struggle in this way. So, it was critical for the baby that ECMO was available because there wouldn’t have been an opportunity to transfer the baby safely to another facility to be considered for ECMO.”

Because of the seriousness of the newborn’s condition, time was of the essence. However, a process must be followed before placing a baby on ECMO. The specialists had to rule out other causes, such as a congenital heart defect.

The team also had to ensure that placing the infant on ECMO wouldn’t cause more harm than good by verifying there weren’t any other risk factors or contraindications before going on ECMO.

“For this particular baby, it was a matter of hours for us to figure out what was going and make sure there was nothing else that wasn’t amendable before going on ECMO,” said Dr. Gonzalez. “We must go through a series of diagnostic testing before we can determine that ECMO is the safest, most viable treatment option.”

There are countless measures the team must go through in a brief timeframe to ensure the best possible outcome.

“We definitely maximize medical therapy before we make decisions about using ECMO,” said Dr. Khan. “In addition to the diagnostic testing Dr. Gonzalez mentioned, we maximize blood pressure medications and ventilatory settings and explore all options to deliver oxygen. But despite those measures, if our patient is not improving and we don’t have a condition that’s amendable to ECMO, then we proceed with ECMO.”

Once it was determined that ECMO was required, the surgical and NICU teams suited up for surgery. Dr. Fallon and Haroon Patel, M.D., practice medical director for Pediatrix Surgeons of Houston and a pediatric surgeon at TWHT, performed the ECMO placement in a specialized area in the NICU. The surgeons were assisted by the neonatologists and ECMO team.

“The lifesaving measures would not have been possible without the onsite pediatric surgeons and ECMO program at TWHT”, said David Horst, M.D., practice medical director for Pediatrix Neonatology of Houston and a neonatologist at TWHT.

Without the ECMO program, babies with other severe conditions would require transfer to other hospitals. The pediatric surgical team recently performed a congenital diaphragmatic hernia (CDH) repair on a NICU baby, the first in at least 10 years at TWHT. CDH, a rare birth defect, is an opening in a baby’s diaphragm, causing the abdominal organs to move into the chest cavity during development. Depending on the severity, it can lead to serious disease and death.

“Some congenital diaphragmatic hernias are far more complex than others,” said Dr. Patel. “This case was extremely complex and required a coordinated team effort and significant resources. Without this level of in-house collaboration, teamwork and expertise, this particular baby would have required transfer and may not have survived.”

Since the addition of the pediatric surgical team and the ECMO program, several notable recent “firsts” at The Women’s Hospital of Texas have occurred (meaning they haven’t been performed in at least 10 years, if ever, at TWHT).

“In addition to the CDH repair, there are three significant firsts during the last several months that come to mind,” said Dr. Fallon. “We performed a tracheoesophageal fistula (TEF) on a baby that was transferred to us from another facility in the HCA system. We had another baby we initially thought had a complex ovarian cyst that ended up being a very large choledochal cyst, which is a rare dilation of the common bile duct that is infrequently seen in babies. The third was a newborn with sacrococcygeal teratoma (SCT), a tumor that was diagnosed while the baby was still in the womb. The delivery and surgery can be very complex because these tumors can be very vascular and bleed quite a bit. So, there were a lot of resources that were devoted to both the baby’s delivery plan, subsequent stabilization and operative repair. Prior to our pediatric surgical team, our maternal-fetal medicine team would have probably delivered the baby at a different hospital that could have performed the surgery shortly after delivery.”

The ECMO program supports the NICU and surgical teams’ ability to provide care for critically ill infants that would have previously required transfers to other hospitals.

“We’ve only had one other baby go on the ECMO circuit, or the ECMO pump, since we launched the program,” said Dr. Gonzalez. “But, in our ability to offer this service and medical care, we’ve also been able to take care of several other babies that would have otherwise been sent to other facilities because they were on the edge of needing ECMO therapy. Therefore, we’ve been able to keep more patients in our hospital system and not transfer as many patients out, which is really important for our NICU patients and their families.”